What is Reg A+? Reg A+ is a new version for the SEC’s original Regulation A. It’s also called a “mini-IPO.” Reg A has been around for several years, however, it was seldom used because it was accessible to only very small financings, had many restrictions and was costly. As part of 2012’s JOBS (Jumpstart […]

Reg A+ is a new version for the SEC’s original Regulation A. It’s also called a “mini-IPO.”

Reg A has been around for several years, however, it was seldom used because it was accessible to only very small financings, had many restrictions and was costly. As part of 2012’s JOBS (Jumpstart Our Business Startups) Act, the SEC was tasked with updating Reg A to make it more beneficial as a capital-raising tool. Reg A+ is the final outcome and became effective on June 19, 2015.

How is Reg A+ an enhancement over Reg A?

The key benefits of Reg A+ include:

What companies are eligible to use Reg A+?

Reg A+ can be used by any company – including shell companies and issuers of penny stock – that is accountable under US or Canadian law and has its principal place of business in the US or Canada.

The following type organizations CANNOT benefit from Reg A+:

What is the Reg A+ filing process?

To offer securities under Reg A+ an eligible issuer must file and qualify an offering statement on SEC Form 1-A. Qualification is akin to a traditional S-1 registration statement declared effective by the SEC.

Form 1-A has three parts:

Some requirements of Reg A+ depend upon the amount of the offering. Reg A+ provides for two types of offerings: 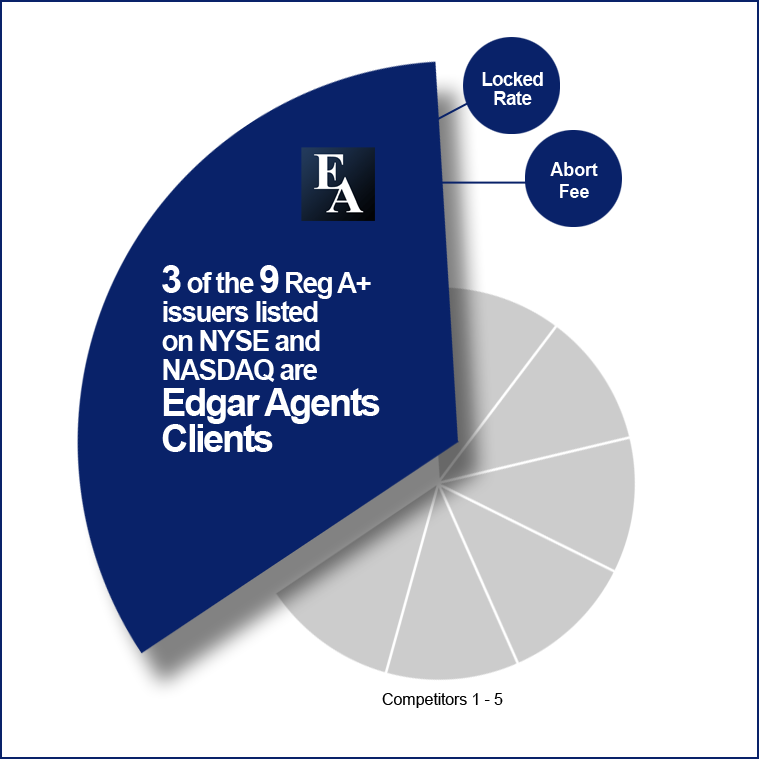 Has Edgar Agents filed 1-A filings for RegA+ Issuers?

Edgar Agents have contributed greatly to the process (and success) for many companies. In fact, as of iPic’s February IPO, 33% of the RegA+ offerings that went effective on the NYSE and Nasdaq exchanges is our work.

What kind of financial statements must be submitted?

How much can insiders sell as part of a Reg A+ offering?

Maximum of 30% per offering, either tiers.

What kinds of investors can participate in a Reg A+ offering, and how much can they invest?

Can an Reg A+ company communicate with prospective investors?

A Reg A+ issuer can “test the waters” with any potential investors before or after the Form 1-A is filed (and the ability to test the waters under Reg A+ is broader than what’s permitted for EGCs – emerging growth companies).

No offers can be made unless the offering statement has been filed with the SEC.

Are Reg A+ confidential filings?

How does Reg A+ facilitate Exchange Act registrations?

Issuers using Tier 2 may register for an exchange listing using Form 8-A rather than the much lengthier Form 10, though they must follow Part 1 of Form S-1. The filing of a Form 8-A will suspend Reg A/A+ reporting obligations, but normal public company reporting obligations will kick in on filing.

Note that Reg A+ issuers are not subject to full public company reporting. An issuer must register under the Exchange Act once it has 2,000 shareholders of record, but Reg A+ shareholders are excluded from the 2,000 share count if the issuer:

Are shares issued in a Reg A+ offering freely tradable?

Post 1-A effectiveness, what SEC files are Reg A+ issuers required to file?

What are the risks?

Reg A+ offerings are public offerings, so there is liability under Section 12(a)(2) of the Securities Act for any material misleading statements or omissions in the offering statement. Because Reg A+ offerings are not registered, there is no liability under Section 11 of the Securities Act, but offering statements can still be subject to the antifraud provisions of the federal securities laws. Test the waters communications are also subject to antifraud liability.